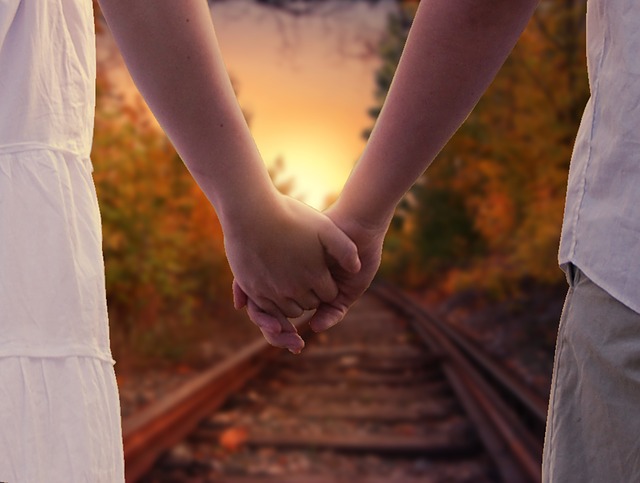 Two young children decide to take a walk together across an empty field near their backyards, holding each other’s hand. Then a gander and several geese suddenly burst forth through a broken portion of a back fence. One child notices that two of the geese have become stuck in part of the damaged section of the fence. He is concerned, and a little too eager to help them. He pulls the other child along, very noticeably against her will, in the direction of the noisy new arrivals. But as the children approach closer, the geese—out of fear—manage to get themselves free. Then, with no warning, the ever-vigilant and protective gander races toward the children, its beak angrily honking and snapping at them. They both run back to their homes, screaming and crying—quite scared and upset!

Two lovers casually stroll alongside a foggy, secluded lake. The young man gently holds the girl’s hand as they approach a narrow footbridge stretching over a wide canal that feeds the lake. They cross the waterway quickly, but the young couple becomes detached when the girl is distracted and lets her hand slip out of her boyfriend’s grasp. With her hands now by her side, she feels lost, her heart filled with longing and emptiness. With fog drifting across the bridge now between them she is confused, unsure whether to go forward, or to wait, or to turn back. The young man is now far ahead and out of sight. But then she hears him calling out to her, and runs toward him. In just a few minutes, she approaches him as he eagerly reaches for her with his arm stretched out. She leaps forward with a quick bound, and slides her hand back into his grasp. Then he gently but firmly clasps his hand around hers, pulling her along as they reach the other side of the lake. Back on the path again, they resume their casual walk around the lake hand-in-hand, the girl now wiser and willing to be more dependent on the young man than she was before.

A middle-aged man stumbles around in the middle of a congested downtown street corner after sunlight reflecting off a window temporarily blinds him. He tries to find his way himself, but has to resort to calling out for help. Some think he’s crazy. Others laugh at him, that is, until he heads toward the curb at Forty-Fifth Street where traffic is moving rapidly in both directions. Some scream and yell when they see where he’s headed. Others quickly turn away, unwilling to watch the impending disaster unfold. But one older gentleman ignores everyone and takes the initiative. He quickly and carefully grabs the man’s hand, while coaxing and leading him away from the maddening flow of vehicles. At this point, all the blinded man really needs to do is to keep his hand in the hand of the other man, remaining fully dependent on him until he is safe.

In their zeal to please God, many people are eager to solve the problem that has just arisen by themselves, like the child who wanted to free the geese, but gave no thought to what the consequences might be.

They are willing to let God hold their hand, but instead of waiting on Him when an unexpected circumstance arises, they end up rushing ahead. As a result, they grab God’s hand and try to pull Him along with them, contrary to His will and plan for their lives. They want to help so much that they end up ahead of Him, and in dangerous places. Twice God warns about such actions: “There is a way which seemeth right unto a man, but the end thereof are the ways of death” (Proverbs 14:12 and 16:25). But Psalm 25:5 says: “Lead me in Thy truth, and teach me: for Thou art the God of my salvation; on Thee do I wait all the day.” And in Psalm 27:14: “Wait on the Lord: be of good courage, and He shall strengthen thine heart: wait, I say, on the Lord.”

There are others who love the Lord dearly, but tend to become easily distracted in their relationship with Him. Like the girl who crossed the bridge with the young man, they let their hand slip out of His as He moves on and they are left behind.

They become confused as to which direction to go next. Their heart still desires Him, but their mind is caught up with something else. They become disoriented and try to figure out their next step without Him. Before long, they cry out in despair—until His voice can be heard after a while in the distance calling to them. Then they race toward Him, and place their hand back into His outstretched hand. So often we think God has left us behind to figure out our way on our own. Yet the opposite is true. We let go of His hand and no longer keep up with Him. Nevertheless, God promised us in His word that He will not abandon us. “…the Lord, He it is that doth go before thee; He will be with thee, He will not fail thee, neither forsake thee: fear not, neither be dismayed” (Deuteronomy 31:8).

Finally, there are those who, for one reason or another, are not able to spiritually perceive the way before them. They know where they need to go, but are not able to get there safely on their own.

They grope around, hoping to find the right path so they can go forward on it. They know dangers are all around them, yet they can’t fully perceive where they are to avoid them. They need the help of one who knows the road ahead and can discern the perils all around. The Bible alludes to their answer in Isaiah 42:16: “…I [God] will bring the blind by a way that they knew not; I will lead them in paths that they have not known: I will make darkness light before them, and crooked things straight. These things will I do unto them, and not forsake them.”

If you are a child of God, where is your hand today? Is it firmly clutched around His hand, ready to pull Him along your way? Or is it gently resting in His, the same Hand that “…leadeth me in the paths of righteousness for His name’s sake” (Psalm 23:3)? Perhaps your hand is by your side, nowhere near Him. So often in our desire to obey God and His Word, we lose track of where we should place our hand. We cannot let distractions keep our hand out of His. Neither can we lead Him along by trying to place His hand in ours. God wants us dependent on Him. This is the day for you to decide to put your hand into His and keep it there—trusting Him from now on to safely lead you every step of the way on the path He has chosen for you,. Then you will experience the peace, satisfaction and assurance that only He can bring into your life.