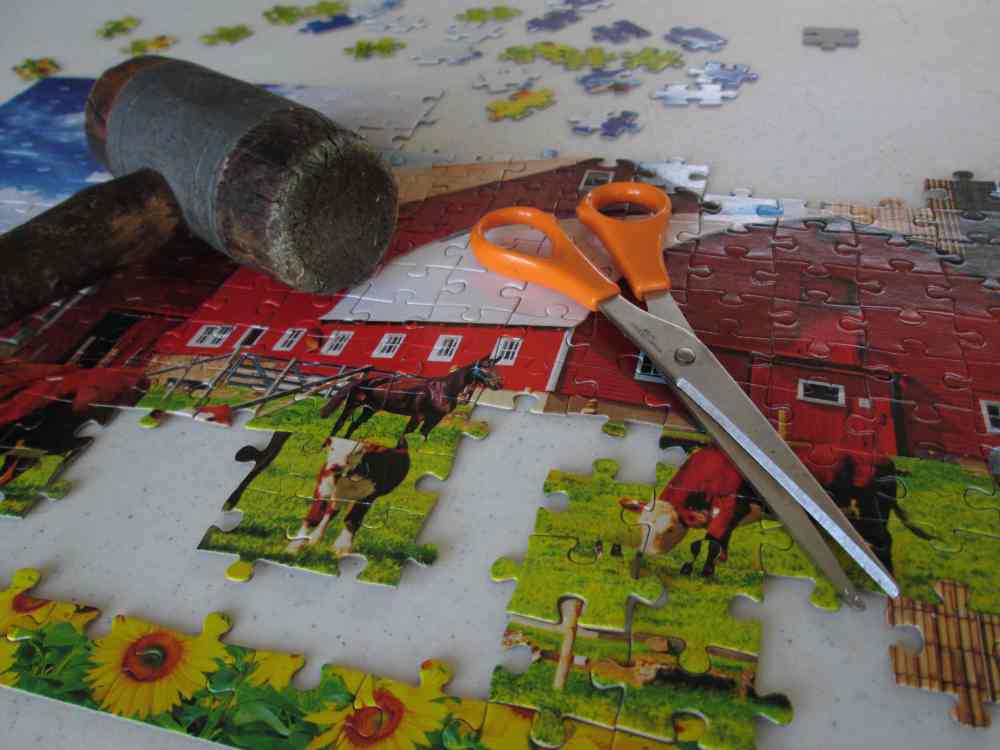 Jigsaw puzzles and Marvin were a born match. There isn’t a puzzle around that he will not try to tackle. While he is fond of the five-hundred-piece variety, he’ll just as easily jump at a chance to complete one that contains a thousand or even two thousand pieces. He works on these like some people eat potato chips—give him one piece, and he will go through most of the box before he even tries to stop.

But his passion does not stop his insistence on making all of the pieces fit into place.

Just the other day, he was working on one that was made from a drawing loosely based on an aerial view of a zoo. It was much more challenging than many others he had assembled in the past several months. But he was up to the task, and immediately began to work on portions of the center, rather than the edges where he usually started. After a couple of hours, he grew frustrated, since whole sections of the puzzle would not connect to each other. This soon turned into real anger as he began to vigorously pound some of the pieces in place.

“This company must have some defective equipment,” he said to himself. Right after he tore off portions of some the ‘flawed’ pieces in order for them to fit, two of his friends, Madison and Connor, dropped by.

“Wow! This is one of the biggest yet that you have put together,” Connor remarked.

“Yeah, but I’m beginning to lose interest in it. They didn’t seem to put much effort into making it correct,” Marvin replied.

Madison scanned the chaotic mess of unworked pieces and then the areas Marvin had finished. “Hey! Some of these are in the wrong place,” Madison said.

“No, they aren’t; they just cut them incorrectly,” Marvin responded.

“Then why is the zebra’s head sitting on top of the boat? Look over here. Right where the lion’s den is supposed to be, you put in a pond with flamingoes! Why, they didn’t manufacture this puzzle wrong—you made the pieces fit.”

“Well don’t fret Marv,” Conner said, “We’ll help you get this together properly.”

With the help of his friends, Marvin soon had the puzzle corrected and redone properly before the day was over, in spite of his earlier efforts to remedy the ‘mistakes’ of the manufacturer.

Although this was just a trivial hobby that would certainly not impact society as a whole, we actually do something like this quite often with God and His plan for our lives.

Rather than being obedient to and patient with what He knows is best for us, we try to force everything that doesn’t seem to work for us to fit into what we think is best.

In the book of Proverbs, the Bible says more than once, “There is a way that seemeth right unto a man, but the end thereof are the ways of death” (Proverbs 14:12, 16:25). Only God’s way is the means to life. King Solomon, one of the wisest men in the history of the world, said in the end, “Let us hear the conclusion of the whole matter: Fear God, and keep His commandments: for this is the whole duty of man” (Ecclesiastes 12:13). Making His Word fit us is the opposite of what God desires. Over and over we can see throughout the Old Testament how the Israelites kept trying to do it their way, and rework the commandments God gave them into something that fit their lifestyle. But all that resulted was captivity and death.

Sadly, even now in modern times, we are doing the same thing. We conclude that the Bible is too complicated, difficult, or out of touch with the current world scene. Then we begin to trim away the parts that don’t seem to fit, like Marvin did when the puzzle pieces wouldn’t connect properly. Instead of studying, or better yet, asking the Lord why things aren’t coming together, we force the situation to work our way.

We cut out the inconsistencies and proudly declare that our life is complete, with everything coming into place.

Yet, if we were to stand back and look at our life, we would see just how mixed up things have actually turned out. Like the zebra head in the boat, items that belong here are over in the wrong place in another area.

Let’s not be like Marvin and pound the pieces of the puzzle of our life into some place where they don’t belong. Rather than forcing the plan of God to work in our life, and trying to make it fit, let’s yield ourselves over to Him—and actually do what He says for us to do in His Word. The Bible isn’t just a historical record, a collection of poetry, or a complex prophetic book. It is the means by which we are to live as God’s children. “All scripture is given by inspiration of God, and is profitable for doctrine, for reproof, for correction, for instruction in righteousness: That the man of God may be perfect [blameless], thoroughly furnished unto all good works.” (2 Timothy 3:16-17).