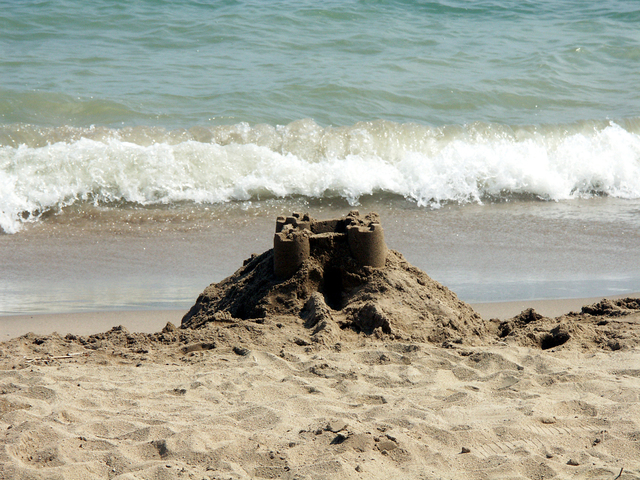 When I was a child, my family preferred to go to the beach whenever possible for vacations—not so much for the sun or to swim, but more to take in the refreshing air and relaxing sounds of the surf. I never cared to go swimming, never wanted to ride on the waves, or even to go wading in water higher than my waist. This is mostly due to one small detail—not being able to swim! My particular fondness was building sandcastles. I enjoyed creating grand structures in the sand, particularly in forming them dangerously close to the water’s edge. I doubt that any king would have wanted to reside in the ‘castles’ that I formed though! In fact, I think he would be in a constant state of fear, considering how close these ‘fortresses’ would be to the incoming waves.

I would naturally build some kind of retaining wall, perhaps even two or three, to help protect the ‘castle’ that would eventually rise up from the sand. (I’m using the word ‘castle’ loosely here, since the end result of my endeavors only vaguely resembled anything a self-respecting monarch would live in!) I have found that, no matter how carefully I would take handfuls of dripping wet sand and try to construct something with them, when I finished almost nothing resembling a building remained. It did not matter how hard or how fast I tried to use the sand. The mixture would soon just dissolve into the sand around it, if not first swept away by an incoming wave.

“But God, who is rich in mercy, for his great love wherewith he loved us, even when we were dead in sins, hath quickened us [made us alive] together with Christ, (by grace ye are saved;) and hath raised us up together, and made us sit together in heavenly places in Christ Jesus: that in the ages to come he might [show] the exceeding riches of his grace in his kindness toward us through Christ Jesus. For by grace are ye saved through faith; and that not of yourselves: it is the gift of God: Not of works, lest any man should boast” (Ephesians 2:4-9).

Have you ever thought about the fact that our own works we do for God are much like building fine castles with handfuls of wet sand? They ultimately prove to be futile, without any lasting merit. It doesn’t matter how much work we do on our own to try to make ourselves right before God. In His eyes, these efforts are worth nothing more than a pile of wet sand. If we decide that we are going to clean ourselves up before we come to Him, we are just wasting our time.

At the beginning of each new calendar year, we have lots of great ambitions to lose pounds and pounds of weight, read numerous books, fix everything broken in our home or vehicle, visit places all over the world, maybe even clean up our lives and make ourselves right with God, as well as with everyone else. Yet, after just a few months (or even a few days), these great ambitions soon fizzle out. We find ourselves in the end not much better than we were the year before. Why does this happen? because we do it all by our own strength and effort. To put it bluntly, God does not need our help (or even us, for that matter). Whenever we try to do God’s work for Him, or try to help Him with His work, we are doing it without Him. Yet it is only by the grace of God that we can even be here today.

What is God’s grace? Many views and explanations have been put forth. But, in a nutshell, His grace is His perfect love (something we, as finite beings, can’t truly understand) and favor for us that makes Him willing to overlook our faults and shortfalls, even though we don’t really deserve anything but death eternally in Hell. Grace is continuously flowing from Him, but that does not mean that it automatically flows over or covers us. We need to first accept it, and then to be obedient to His commandments and His will.

We can only do this by accepting the sacrifice that His Son, Jesus Christ, made on the cross over two thousand years ago for our sins as our own, done for every man, woman and child who ever lived.

There is nothing we can do by ourselves to earn His grace or favor. No human being, or even the angels above, can earn His favor.

We need to come humbly before Him instead and yield our lives to Him. We need to turn completely in the opposite direction in our sinful ways, willing to totally forsake them. We can’t remain in their shadow  and also be successful with Him.

At the same time, this needs to be a continual effort. Whether you accepted Christ and became a believer decades ago, or only just recently, you need to come humbly before God, our Heavenly Father, daily, and yield to Him. For many, the act of surrender is considered a one-time event. But God expects it every day. “And he said to them all, If any man will come after me, let him deny himself, and take up his cross daily, and follow me” (Luke 9:23 emphasis mine).

This is not some type of asceticism, but rather, not allowing our old sinful self to continue to control us. If we are not surrendering ourself to God every day, we are operating on our own plan. Then all our efforts become just futile works, not worth much more than elaborate castles built of piles of wet sand. This ultimately will lead us to boasting about our works, thereby leaving God out of the picture.

Don’t try to please God with your own works, thereby nullifying the finished and complete work of Jesus at the cross. Yield to God instead, and trust Him do all of the works for you.