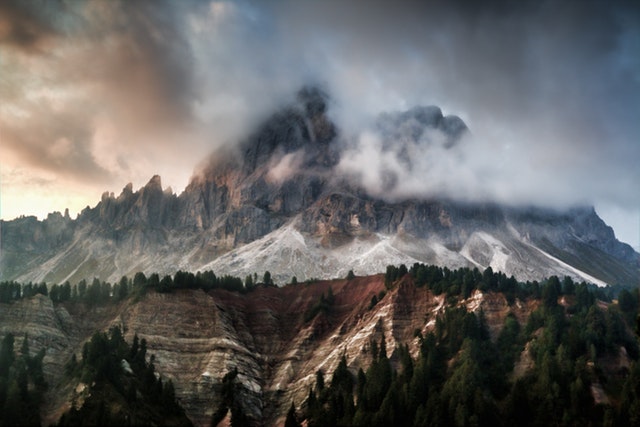 The view was outstanding, and they were only a couple of hundred feet up the side of the mountain. Now more than ever, Janet and her younger brother Caswell wanted to reach the peak. If the sight of the surrounding region was this wonderful here, it must be absolutely breathtaking at the top. Hal, their guide, was relieved, since many of those that he leads often want to turn around at this point.

After struggling up one precipitous path after the other for another hour, they finally reached a small plateau.

With much pleading and coaxing from the hikers, Hal reluctantly conceded to their request to refrain from further climbing, and they set up camp for the night. Janet bundled up in preparation for the chilly night ahead, while “Cas” preferred to wear only what he had on, relying on the sleeping bag for warmth. Hal, still somewhat wary of stopping at this location in their ascent, chose to dress for a quick departure.

Three hours later, their slumber was abruptly cut short as the ground started shaking and the sounds of tumultuous rumbling filled the whole region.

“Get up! Get up! It’s a rockslide!” Hal shouted. They all scrambled out of their tents while grabbing as much of their supplies as possible. In the midst of all the commotion, Hal ordered them to move quickly along the side of the mountain, just near the left edge of the plateau. Mere moments later, a deluge of small boulders and gravel poured over the cliff right above their heads. The place they had just fled from was completely inundated.

Each hiker, although very shaken up, breathed deep sighs of relief. “Wow, that pile of rocks could have fallen all over us,” Cas remarked, looking back over the place where they had just been sleeping.

“Well, actually, you would be all the way down there, and asleep permanently,” Hal grimly responded while pointing to the valley hundreds of feet below.

“That slide was more powerful than it appeared. Your tent would have been no match for it.” Following a few more minutes of rest, the group pushed forward on the small trail they had used as an escape earlier. “Now you know why I wasn’t keen about resting in that spot. Come on, let’s keep moving for a little longer. I know a better place just a short way ahead where we go and can finish sleeping,” Hal said encouragingly.

The following morning broke with a bright sun, a beautiful blue sky, large clusters of clouds, and a cool, light wind blowing over the tired but enthusiastic hikers. Hal managed to put together a small breakfast with some of what was left from the previous night’s escapade. After they ate, everyone pressed on toward the peak.

Hal estimated that there was just over a mile to go, but he also cautioned that this would be one of the most difficult parts remaining. Even so, his two intrepid explorers didn’t let this dampen their zeal.

Their excitement did not last long. The sun soon disappeared, and the clouds seen earlier began to thicken. The breeze became a strong, biting wind. Hal informed them that a storm was moving in, but they were not to panic, since he was going to lead them on a longer route instead, which would provide some shelter. Janet and Cas’ exuberance began to fade. They no longer wanted to continue, despite Hal’s reassurance.

Thunder echoed among the mountains as the hikers moved slowly along. Hal was right—the detour did give them a fair amount of protection.

While the stormy weather raged on all around them, they still managed to climb higher. Yet Cas could not be convinced that things were going to improve if he kept going.

He stopped, warily looked around, and then began to cower in fear. “We’ll never make it,” he moaned. But he knew that turning around and returning home was not a reasonable option.

It wasn’t long before Janet started feeling the same way, and in a short time they both came to a total standstill. The top of the mountain was completely gone.

All they could see was a wild and turbulent situation above them. Even Hal had vanished from sight in the clouds earlier.

Then, a short while later, he returned to the two scared hikers who were trying their best to hide from the dreadful conditions.

“What are you doing here?” he shouted. “Let’s move! The best is yet to come!”

“We can’t go any farther. Don’t you see how awful it is out here? What do we gain by going on? It’s just not worth it!” Janet screamed in reply.

“I told you earlier that we were at one of the hardest places in our climb. Don’t give up now. You are letting your discouragement run your life. These storm clouds are obscuring your view. It’s beautiful up there!”

Reluctantly, the two hikers pulled themselves together and slowly followed Hal up through the thick and tempestuous clouds ahead of them.

After a half hour of struggling, things started to dramatically change. The atmosphere began to thin out and the sun started to shine brightly again.

“Hey, look, we are climbing up out of the storm!” Cas eagerly remarked. “It’s not as bad as it appeared. I can see for miles now!” 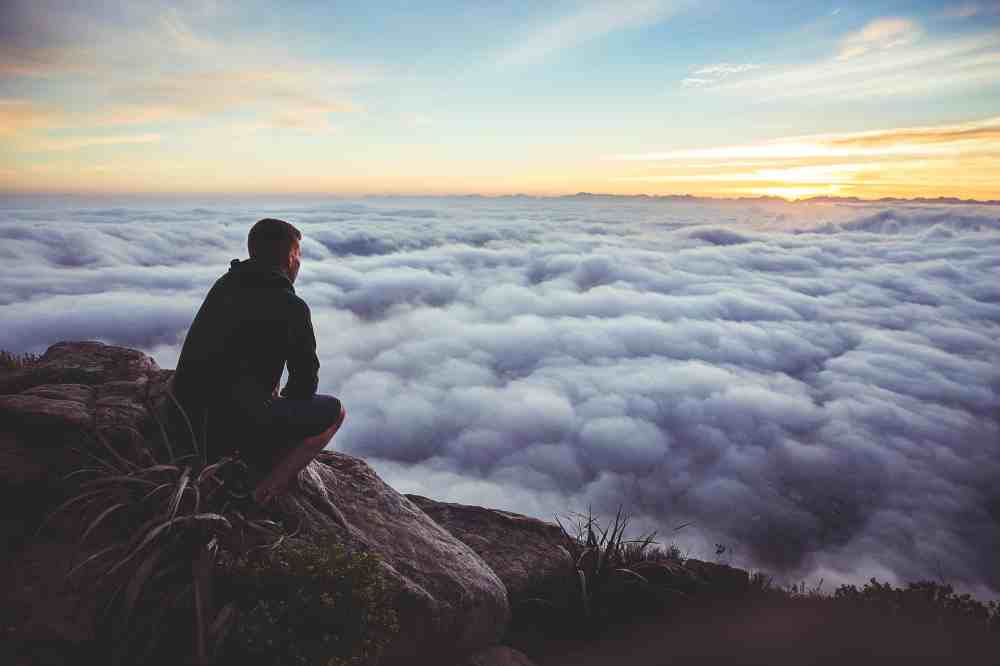 Janet’s countenance began to change as she, too, was enveloped by the bright sky. “Wow! The clouds are now beneath us! It’s a beautiful day again!”

As they finally arrived at the top of the mountain, the two climbers danced about. “We made it!” they shouted joyously.

In our walk with God, we are also going to find difficult areas and places where we cannot see how we can make it through on our own. There are going to be mountains to climb, and valleys we must descend to. But we should not allow rough areas or storms to deter us from traveling on.

The Lord, our guide through this journey, expects us to look to Him for direction, encouragement, protection, and strength.

In Exodus, God guided His people on a journey through the wilderness. They looked forward to it when it began, but soon became discouraged when they encountered difficult obstacles they didn’t know how to deal with. But every time they turned their latest challenge over to God, their leader throughout the whole trip, trusting in Him, they would make it through. But when they let their doubt, fear, and discouragement obscure their view, their circumstances were able to block their way or overtake them.

In our journey with God, we can easily let stormy weather discourage us from going on to higher altitudes, too.

We often want to just turn around and go back where things seem calmer and more manageable. But if we do this, we will still have to go through the previous challenges we had to overcome before. It is very likely that we will find ourselves even worse off than if we had pressed on and gone forward. This is the reason we need to turn any difficult situation over to the Lord, and not rely on our own feelings or understanding. We don’t want to let fear of the storms end our journey prematurely. If we keep following Jesus, our Guide who has already succeeded in reaching the top of the journey, we can be sure that He will lead us safely all the way through.