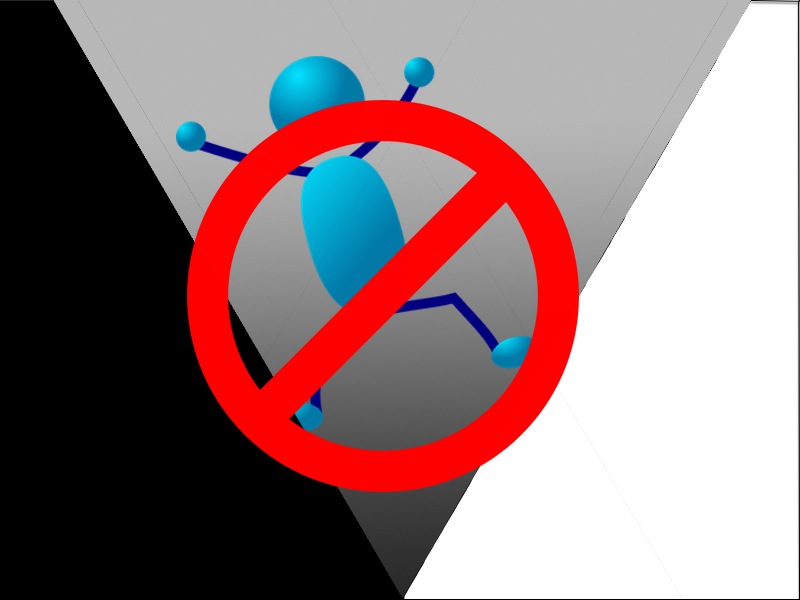 An answer to a question on a forum post I read recently stated that there is black, and there is white, with 256 shades of gray in between. The thought of gray areas between black and white led me consider how we often think of God and the Devil. In our sphere of understanding, we tend to view God as the white side, and the Devil as the black side, with our existence being in the gray areas between the two. As long as we do what is right, and keep from doing what is wrong (at least, our definition of right and wrong), then we will move up or down in one of those gray areas.

We figure that, at the end of our existence, we will hopefully end up in the white side, and all those who did too many wrongs will end up on the black side.

We might also feel that somewhere along that gray-shaded road, we might make the decision to go God’s way and jump off the gray road onto the white side before we die, while the rebellious ones slip off onto the black side.

This is far from the truth. In reality, there is no gray area, there is only black and white. No matter how much ‘good’ we do, or may have done in our lifetime, we will always stay in the black side. We are never between the two sides; we cannot straddle the fence. We may think that we weren’t that bad, with just a little lie here, and maybe an insignificant item stolen there. But a window is still broken, even with just a little crack.

You probably wonder how you ended up in the black side in the first place. To be honest, you never ended up in the black; you began there. Our first ancestors, Adam and Eve, were on the white side in the beginning. But, by way of the Devil, Eve’s heart was deceived, and as a result, Adam ended up willfully sinning against God. This meant that Adam and Eve could no longer remain in the white side, since God is holy, and cannot tolerate any sin. (For a more detailed background, read Genesis 3 in the Bible.)

Now Pandora’s box  of sin was opened and could not be shut. It resembled a little bit of yeast which causes a whole loaf of bread to keep rising. Sin has now spread throughout the whole earth. It has been, and still is, present in everyone, everywhere. Its effects have been deteriorating everything in the earth, including the earth itself, for centuries.

We have been boasting of the great progress we have made since the early days of our existence, yet we are no more out of the black side than the moment that Adam and Eve were driven into it.

To add more bad news to all of this, we have been blinded to the fact that we are constantly living in sin, unless God, through His Spirit, opens our eyes to see how sinful we are. Then, to add insult to injury, we, in our own strength, cannot get free of sin and get out of the black side.

It may seem hopeless at this point, but this is just where hope begins! God already had a plan for bringing every man, woman and child out from the black side, long before Adam and Eve were even created. Why did He wait until after-the-fact to make His plan known? Why couldn’t He just stop sin as soon as it started, or make a means to prevent it from ever occurring? It all comes down to what is called the ‘free will.’ God put within each of us the ability to choose—to make our own choices. He never made us as machines, or robots with preset programs, that decide what we would or would not do. He is not a supreme dictator that makes uncompassionate ‘do or die’ commands upon every living thing. He is a loving God who knows us more that we know ourselves. In normal family relationships, parents love their children, and the children choose to love their parents in return. They are not ordered to love them. The option exists for the child to choose not to love them at any point. But most don’t, because they do love their mother and father. If God prevented anyone from sinning, then there would no longer be any choice available. Any reason to love Him would be taken for granted.

God does not want us to sin. But we have to choose whether we will sin against Him or not. He will not force us, or corner us, into following Him.

The plan He made to rescue us further emphasizes His love for us. He always sees the big picture and knows what our future will be. As a loving Father, He looks out for us (if we allow Him to) by making a means of escape. In order to come before Him, we cannot have sin in our heart. And the penalty for our sins is death. During the time period of the Old Testament in the Bible, God made a temporary covering for sin. It was through the sacrifice of an innocent lamb. But this sacrifice was temporary and incomplete, and could not permanently remove our sins. Therefore, God prepared a way for a permanent sacrifice to be made, through His Son, Jesus.

Jesus left His heavenly Father and became human like us, but without sin, or allowing sin to enter into His heart. During His time on the earth, He remained obedient to His Father, fulfilling all of the requirements that God had laid out in His Law (found in the first five books of the Bible). The ultimate fulfillment came when His Son willingly sacrificed His life on a cross, just like the innocent lamb that had to sacrifice its life on the altar. That is how much God (and His Son) loves us, so much that He was willing to give His Beloved Son as a sacrifice for everyone: past, present, and those not even born yet, and that His Son was just as willing to make this sacrifice. The good news for us is, that all we have to do is believe in His Son, and accept His sacrifice as our sacrifice.

“For God so loved the world, that he gave his only begotten Son, that whosoever believeth in him should not perish, but have everlasting life. For God sent not his Son into the world to condemn the world; but that the world through him might be saved.” (John 3:16-17)

At this point, we might feel that there may be some gray areas in life, and we’ll stand in them until we can figure out what to do next. It won’t work! It is still black and white only. We make the gray areas by believing the lies that the Devil feeds us. Just ask Eve:

“And the woman said unto the serpent, We may eat of the fruit of the trees of the garden: But of the fruit of the tree which is in the midst of the garden, God hath said, Ye shall not eat of it, neither shall ye touch it, lest ye die. And the serpent said unto the woman, Ye shall not surely die: For God doth know that in the day ye eat thereof, then your eyes shall be opened, and ye shall be as gods, knowing good and evil.

And when the woman saw that the tree was good for food, and that it was pleasant to the eyes, and a tree to be desired to make one wise, she took of the fruit thereof, and did eat, and gave also unto her husband with her; and he did eat” (Genesis 3:2-6).

The Devil is the master of deceit, and he has had thousands of years to analyze us and to know our strengths and weaknesses (much more than we know). He never wants us to leave the black side, and he does all he can to keep us there. But, through our pride and unbelief, we insist that our way is better, and that we can make it to the white side on our own. Meanwhile, we are busily going off on the wrong road, lost for eternity, still on the black side.

What is your choice? to remain in the black side under the illusion you are in the gray side, or to trust and believe in Jesus and His sacrifice for your sins?

If you made that decision to believe in Jesus, or just want to know more, please click here.