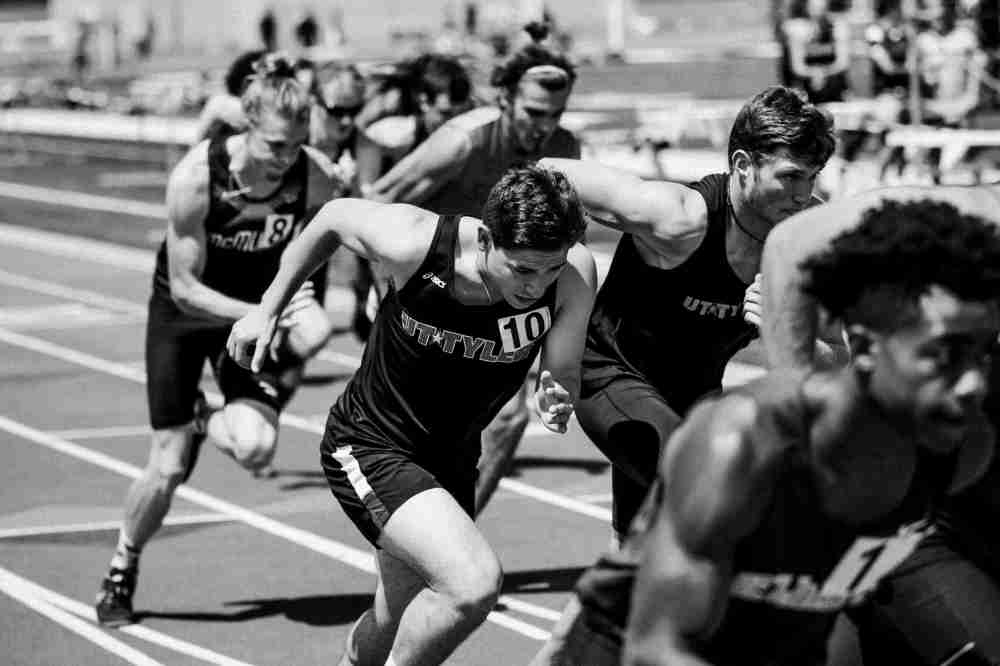 John and his rival, Jose, were avid runners. Both of them were so superior in their class for long distance runs that most marathons had become easy challenges for them. John was very muscular, but Jose had the edge in speed. At six foot eleven, Jose was not only very lean and tall, but also very fast. He could practically run circles around almost all competitors in various track-and-field events.

Yet something odd happened to both of them one day at a race in Europe. Almost all of the participants in the race were at an athletic level similar to those in other parts of the world, and the track conditions were normal. Nevertheless, John and Jose acted in a way uncharacteristic of each of them. In the first couple of practice rounds, they both ran fine, but the way they carried themselves would lead one to believe that they had other things on their mind.

When it came time for everyone to line up and get into the proper starting positions, John got in the wrong lane and became irate when he was corrected.

Then, a moment later, the runners were finally in place when—POW!–the starting gun was fired and all the contestants dashed forward in a full sprint. Jose, naturally in the lead, began to think about many of the previous races he had won. He reminisced about all the cheers, smiles, and praise he had received after each race. He especially remembered the many young people who had boasted about wanting to be like him someday. But the more he let these memories bounce around in his head, the slower he became. When the screams of the audience managed to snap him out of his dreamy state, he realized that the rest of the runners were catching up to him. “No problem,” he thought, and immediately picked up speed, quickly leaving them behind.

John was only a few feet behind Jose, but he was near the inside of the track. As he put forth all of his effort to press forward and get way ahead of Jose and everyone else in the race, his mind returned to his wife and the arguments that had nearly led them to divorce several months ago. Then his thoughts went back to the car accident that sent his daughter to the hospital, which everyone had falsely blamed on him.

He let himself get caught up in retrospective thinking, and began to drift almost far enough back to become part of the rest of the crowd racing behind him.

With the finish line now rapidly approaching, John and Jose put forth their best efforts to reach it before the others could catch up to them. Suddenly, a girl much smaller than them named Misty came bursting out between them, rapidly pressing forward to the end. She had been plagued with all kinds of difficult circumstances and challenges for most of her life, but she never let thoughts of those things keep her from succeeding.

Even though she had a poor start in this race, she just kept pushing forward as hard as she could to the prize that was before her.

Moments later Misty was no longer just neck-and-neck with John and Jose. She surged ahead, crossing the finish line in near record time. John and Jose were in shock—how could anybody beat them? Their only competition these days had really been against each other, and suddenly here came this girl who did not have anywhere near the experience that either of them had.

John and Jose shared one thing in common during this event that kept either of them from winning: they had both let their thoughts drift back to their past, instead of putting their full concentration on what was ahead.

Jose let himself get caught up in thinking about all of his past victories and accolades, while John allowed his thoughts to dwell on personal issues and defeats which clouded his thinking and kept him from focusing on the prize at hand.

These men were both strong, confident, and experienced runners. They had had many triumphs, yet, as long they let their thoughts reside on their past, or anything but the race at hand, they drifted back. Then they lost some of their determination and ended up losing out on placing first in this race.

God wants us to eagerly desire to be with Him and like Him, and to yearn for Heaven, the ultimate place of rest. But, as long as we keep focusing on problems and circumstances of the past which we should have already surrendered to Him, we are going to fall behind.

Then our chances of winning the ultimate prize get farther and farther away. We may think we are continually making headway, but actually, we can end up like someone on a treadmill— running continually, yet never getting anywhere. All we can count on receiving from our distracted efforts is exhaustion.

Instead of allowing ourselves to be engulfed with ‘has-been’ situations and issues, we need to keep them in the past, and to now focus on “press[ing] toward the mark for the prize.” Most experienced runners know that when they take their eyes off of the finish line, and put them on something else, they will lose their position. Have we turned our concerns and worries from the past over to Jesus? Are we still clinging onto what we should have already let go of? Let’s forget those things which are behind, and focus all our attention instead on obtaining “the prize of the high calling of God in Christ Jesus.”