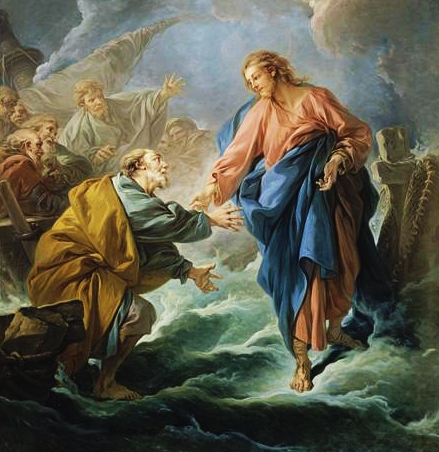 Jesus told His “…disciples to get into a ship, and to go before Him unto the other side, while He sent the multitudes away…[then] He went up into a mountain apart to pray…” (Matthew 14:22-23). Jesus wanted His disciples to go to either Bethsaida or Capernaum in the boat. These two cities were only a few miles apart on the same side of the Sea of Galilee. They made their way along the western coast of the sea, most likely expecting Christ to meet up with them along the way.

Imagine how they felt after nightfall out in the middle of the sea, as storm clouds rapidly forming in the distance came toward them. This time they were alone, without Jesus in their midst. Strong winds and enormous waves came and continually beat against the boat. It wasn’t long before it began to take on water and they thought they were going to sink. In vain they tried to bail water out of the boat, while enormous waves continued crashing all around. When they looked at their terrifying circumstances, the situation appeared hopeless. Satan, the prince of the power of the air, most likely sent the storm. But the Lord would not allow it to harm His disciples, because it was designed to test their faith.

Sometime between three and six o’clock in the morning, Jesus came to them “…walking on the sea….” When the disciples saw Him walking on the water, they became very troubled. They said to each other, “…It is a spirit; and they cried out for fear” (Matthew 14:25-26).

How often have we also cried out in fear in response to the stormy tumult of the world? And how often have we been distracted by our circumstances, and failed to keep our eyes on the presence of Jesus in our midst?

Our doubts, fears, and unbelief hinder us in our walk with God. When we face any type of difficult circumstances, Jesus wants us to reach out to Him in true, believing faith. He wants us to trust Him no matter what type of circumstances or difficulties we may go through. “…without faith it is impossible to please [God]: for he that cometh to God must believe that He is, and that He is a rewarder of them that diligently seek Him” (Hebrews 11:6).

Jesus calls for us to “come” to Him, just as He told Peter to do. He wants us to become a chosen ‘living vessel’ unto Him, “…which after God is created in righteousness and true holiness” (Ephesians 4:24). Those who are a ‘living vessel’ are unconditionally chosen to do the works of God. He wants us out of our comfort zone of life. Peter was able to actually walk on the water when he turned to Jesus to help him. When we respond to the divine presence of the Lord in the midst of our storm, He promises to provide for us also. He will encourage us to ‘walk on the water’ in spiritual pursuits. But we cannot come to Jesus unless He upholds us by His divine power.

If we understand that God sustains all life, then we can begin to better understand who He is. Jesus said, “If you have known Me, ye should have known My Father also (John 8:19).” He is Jehovah-Elohim (“Lord God”)—the Creator-God—who is not detached from His creation. He attends to the needs of His people. In fact, the Lord Himself came down in person to help and save us all, demonstrating that He really is the covenant-keeping God. And when Jesus manifested Himself to His disciples on the sea, He revealed who He really is.

The greatness of Jesus’ power and grace was demonstrated to Peter when he trusted Jesus and stepped out of the boat onto the water.

But Peter took his eyes off of Jesus when he looked down fearfully and saw his own weakness of faith. He failed to keep his eyes on God there with him when he started to sink, because he was overcome by his doubt, fear, and unbelief. So he cried out to Jesus, “Help me, Lord, save me!”

When we look fearfully at the magnitude of the difficulties that come against us, we also take our eyes off Jesus. Then we, like Peter, begin to sink. But when we call out—“Save me, Lord, from these difficulties opposing me!”—He stretches out His arm and rescues us! Jesus shows Himself with more grace for the sake of those who believe in who He is. For all who have Jesus near them, and know that He is theirs, nothing should overwhelm them to an extreme degree with fear and anxiety—not even death itself. Jesus Christ is fully able to take whatever divine action He desires to save His people.

Are enormous waves beating against you right now? This same Jesus is right there with you and is coming toward you—His ‘living vessel’. The same One who stretched out the heavens and walked “…on the waves of the sea” (Job 9:8) is now calling with His gentle voice of peace—“Come to Me.” He walks on the water so that you will know His power.

But He also does it so that you will know your weakness in yourself, as you step out of the safety zone of your life as His disciple. We are never brought to this position on our own—until we find ourselves sinking.

Then this same sense of need drives us to Him. Come to Him as you begin sinking in the deep waters of your own difficulties. Cry out to Him, “Lord, rescue me!” He will stretch out His arm and rescue you.