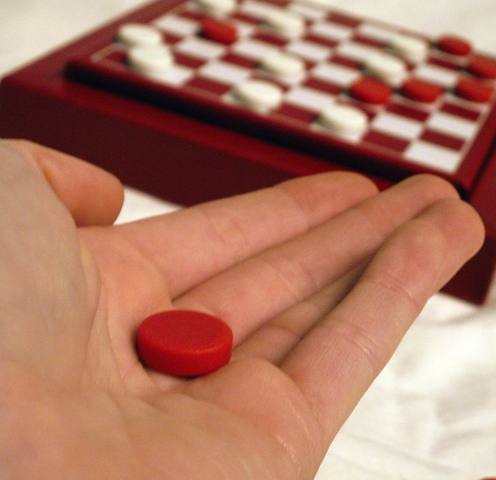 In every board game, such as checkers or chess, the first player makes a move and then another move always has to be made, alternating back and forth until the game ends. Whether you go first or second, your opponent will always have to move one of his pieces to another space after you make your move.

While the work Jesus does is not a game, He does expect the same kind of action from us. In many areas during His time of ministry here on Earth He made the first move. Then He expected man to make the next move after Him.

Let’s look at a few examples. We find the narrative of the death of Lazarus in the book of John. Jesus was informed by Mary that her brother Lazarus was sick to the point of death. Jesus could have just said the word and healed him, like He had done on many other occasions. But this time, He chose to wait until after Lazarus died before He traveled to Bethany where he once lived.

When Jesus finally did arrive, Lazarus had already been dead and buried in a cave for four days. At this point nobody believed there was any hope for him. But that did not matter to Jesus, for “with men it is impossible, but not with God: for with God all things are possible” (Mark 10:27). When He reached the opening of the cave that had been sealed with a large rock, Jesus told those present to “take ye away the stone” (John 11:39). He made the first effort in regard to raising Lazarus from the dead; now they were to make the next move.

Jesus could have moved the rock Himself, but He wanted to see how much they really wanted Him to work in this predicament.

If they were not willing to take the simple step of removing the barrier to the cave, then why should He continue? “Then they took away the stone from the place where the dead was laid” (John 11:41). After a brief prayer to His Heavenly Father, “He cried with a loud voice, Lazarus, come forth. And he that was dead came forth, bound hand and foot with graveclothes: and his face was bound about with a napkin.” (John 11:43-44a). Then “Jesus saith unto them, Loose him, and let him go” (John 11:44b). It would not have been difficult for Him to go one step further and free Lazarus from his burial cloth right then, but that was not the focus here. Jesus expected the next move to be made by them.

Another example is found in the eighth chapter of Luke. “…behold, there came a man named Jairus, and he was a ruler of the synagogue: and he fell down at Jesus’ feet, and besought him that he would come into his house: For he had one only daughter, about twelve years of age, and she lay a dying. But as He went the people thronged Him” (Luke 8:41-42). Common sense says that Jesus should have ordered the crowd to turn aside, rushed over to the ruler’s house, and healed his daughter while she was still just sick. But Jesus does not follow human common sense; He is only obedient to what His Father desires. Therefore, He allowed Himself to be delayed. When He finally arrived at the ruler’s residence, the man’s daughter was dead.

This time, Jesus did not tell anyone to physically do something. He expected them to: “Fear not: believe only, and she shall be made whole” (Luke 8:50).

The next move was in their hands. Jairus needed to believe that Jesus could bring his daughter back to life. In verses fifty-four and fifty-five, at least one of those present followed through and trusted in Jesus’ faithfulness. “And He put them all out, and took her by the hand, and called, saying, Maid, arise. And her spirit came again, and she arose straightway: and He commanded to give her meat.”

Look at one more example found in the fifth chapter of John. In Jerusalem, there was a pool of water that was stirred up periodically by an angel. Whoever entered in during this time would be healed of his infirmity. One man present had been afflicted with a disease for at least thirty-eight years, yet he had not been able to enter into the water in time to be delivered from his condition.

“When Jesus saw him lie, and knew that he had been now a long time in that case, he saith unto him, Wilt thou be made whole? The impotent man answered him, Sir, I have no man, when the water is troubled, to put me into the pool: but while I am coming, another steppeth down before me” (John 5:6-7).

Obviously, the man wanted to be healed; he was just at a loss as to how to do it. But Jesus came along and made the first move: “Jesus saith unto him, Rise, take up thy bed, and walk” (John 5:8).

At this point, the man could have replied, “But sir, I have been trying to walk for some thirty-eight years now and nothing has happened. Could you just pick me up and place me in the pool when it is stirred again?” Yet, in the next verse, the afflicted man believed in the words of Jesus and he made the next move. “And immediately the man was made whole, and took up his bed, and walked…”

Time and time again, we find that God will move first, and then hand it over to us to trust in Him and make the subsequent step. He leaves us with the choice to either obey His request in order to have our victory and deliverance by faith, or to stand still in doubt and unbelief, missing out on the blessing He has in store for us.

The bones of Lazarus might still be sealed in a cave, a synagogue ruler’s young girl would never have seen her thirteenth birthday, and a man might have died next to a pool of healing water if those present had not obeyed the Lord’s command.

Jesus isn’t going to make all of the moves for us. “Even so faith, if it hath not works, is dead, being alone” (James 2:17). He will often leave a portion for us to do, in order to try our faith in Him. Whenever the Lord moves first in our life, we need to remember—the next move is ours.